When I was brainstorming concepts for my Italian Comfort Foods cooking class, I really dug deep. Mozzarella in Carrozza was something that I remember my grandmother making me when I was young. She passed away when I was only 6, and it’s astonishing to have such a vivid memory from that far back. My mom made me this a lot too.

There’s nothing wrong with a good grilled cheese, but this builds upon that by combining the eggy batter. I always describe it as the “marriage of grilled cheese and French toast”, because that’s what it is! 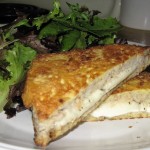 Because you’ve battered a grilled mozzarella cheese sandwich and essentially fried it in butter and oil, it’s clearly a rich and fatty treat. I liked the greens along side because the bitterness in the greens and the sweetness of the balsamic vinegar helped cut through the richness; they also lighten it up a bit. The egg creates a fluffy coating around the sandwich that also gets into the bread. Mozzarella is a great gooey cheese; I’m sure any such cheese would work, but then it wouldn’t be mozzarella in carozza, now, would it?

It’s the simple, comforting things like this that I love about Italian home cooking!